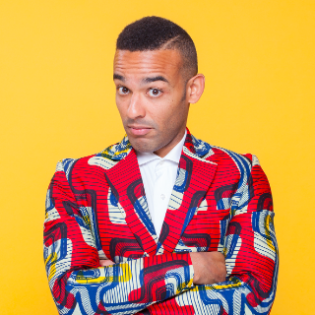 Journalist Ikenna Azuike is a lawyer, journalist and the host of the Tech for Democracy conference 2021.

Ikenna Azuike started his career as a lawyer, but is now a sought-after journalist, presenter, speaker and filmmaker. And now, the host of the Tech for Democracy conference 2021.

Ikenna Azuike was born in Lagos, Nigeria, grew up in the UK, studied law in the UK and France and has been living in The Netherlands with his family since 2004. After working as a lawyer with Shearman & Sterling in London, Singapore and New York, and with Clifford Chance LLP in Amsterdam, he decided to change course and follow his passions for broadcasting and social activism.

Together with his wife, Mette te Velde, he co-founded the Strawberry Earth Foundation to fast forward our transition towards a sustainable planet and he created the satirical news show What’s Up Africa. His show was subsequently commissioned by the BBC, aired on BBC World News television for 6 seasons, was shortlisted for an Association of International Broadcasters Award, and amassed over half a million followers on social media.

Listen to Ikenna Azuike speak at the conference