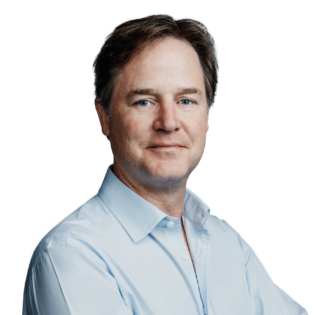 Sir Nick Clegg is Vice President of Global Affairs and Communications at Meta.

Sir Nick Clegg joined Meta in October 2018 as Vice President of Global Affairs and Communications after almost two decades in British and European public life. Prior to being elected to the UK Parliament in 2005 he worked in the European Commission and served for five years as a Member of the European Parliament.

He became leader of the Liberal Democrat party in 2007 and served as Deputy Prime Minister in the UK’s first Coalition Government since the war from 2010 to 2015. He has written two best-selling books: Politics: Between the Extremes and How To Stop Brexit (and make Britain great again). Nick currently lives in California with his wife, Miriam, and three sons.

Listen to Nick Clegg speak at the conference