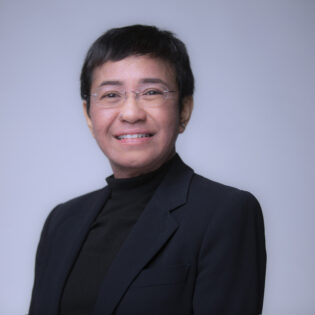 Maria Ressa is co-founder of the Philippine news network Rappler and winner of the Nobel Peace Prize 2021.

With the social news network Rappler, Maria Ressa combines the best of professional journalism with citizen journalism and crowdsourcing. She has been a journalist in Asia for 35 years, most of them as CNN’s bureau chief in Manila and Jakarta. She also served as CNN’s lead investigative reporter focusing on terrorism in South-East Asia.

Maria Ressa wrote ‘Seeds of Terror: An Eyewitness Account of al-Qaeda’s Newest Center of Operations in Southeast Asia’ and ‘From Bin Laden to Facebook’ as Author-in-Residence and Senior Fellow at the International Centre for Political Violence & Terrorism Research in Singapore.

In 2005, Maria Ressa took the helm of ABS-CBN News and Current affairs, for six years determining the strategic direction and managing more than 1,000 journalists for the largest multi-platform news operation in the Philippines. Her work aimed to redefine journalism by combining traditional broadcast, new media and mobile phone technology for social change.

Maria Ressa was named Time Magazine’s 2018 Person of the Year, was among its 100 Most Influential People of 2019, and has also been named one of Time’s Most Influential Women of the Century. She has received several awards with most recently, she became the 2021 laureate of the UNESCO/Guillermo Cano World Press Freedom Prize.

Listen to Maria Ressa speak at the conference